Many of you have heard of Arnold Abbott, the 90 year old man who has been arrested multiple times in Florida for distributing food to homeless people.  Recently authorities in Fort Lauderdale enacted several ordinances intended to restructure the way their city dealt with its homeless population.  One of these ordinances made it illegal to distribute food to homeless people outside in public.  Mr. Abbott has said that he has fed the areas homeless for years, and intends to keep doing so. 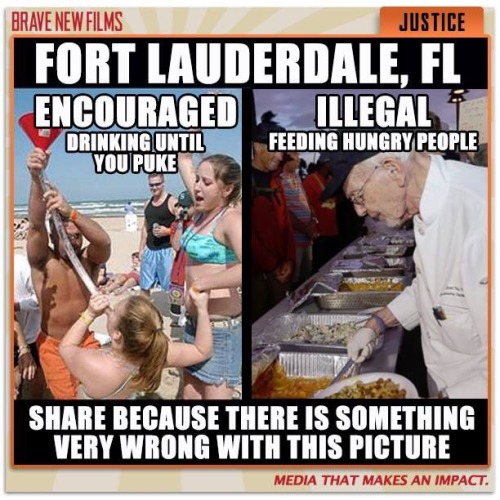 Image Source is http://exoneratearnoldabbott.tumblr.com Interesting coincidence on the name of this post and the name in the top corner of the picture eh?

I have seen this story in my Facebook feed and scattered across other media off and on for the last month.  I have been too busy to keep an accurate count (Those episodes of Star Trek won’t watch themselves!), but I suspect I scrolled by articles directly about Mr. Abbott, or about the others who have also been arrested in Fort Lauderdale for the same offenses at least two dozen times.  I had heard just enough of this story on the radio to justify scrolling by.  When it came across my news feed again this afternoon, I was happy to note that the charges are currently being reviewed, and in fact a Florida judge has instated a 30 day moratorium on the enforcement of the new controversial ordinances.

Another win for the good guys!

Or is it?  We need to ask ourselves why this problem exists.  To clarify, I am not asking you to contemplate or speculate on why there are homeless people in the richest nation on earth (although that would be a good question to ask).  I am asking us to think about the conditions that must have lead to the institution of these ordinances.  Logic would seem to suggest that any sane legislative body should be especially hesitant before passing ordinances like the ones passed in Fort Lauderdale.  We see time and again that important legislation is stalled at all levels of government because of the controversy that is stirred up by the process of creating new rules.  Surely no one wants their time as an elected official to be remembered as surrounded by needless controversy.

Confused by the seeming lack of logic, I jaunted over to http://www.fortlauderdale.gov and stumbled across their mission statement.  It reads as such:

“The mission of the Fort Lauderdale City Commission is to represent the public interest; promote quick and courteous response to neighbor concerns; provide leadership and direction for the City’s future; and assure Fort Lauderdale’s present and future fiscal integrity.”

I asked myself again why the Fort Lauderdale City Commission decided to make such a drastic and bold step.   I found the answer in the first line of their mission statement.

There must have been public interest in such rules.

It is a brave new world we live in.  Heartless and cruel, forgetting the humanity of the broken and oppressed.

Unfortunately the story can not stop with these ordinances being struck down.  We can not all just return to our seats and Facebook feeds until we talk about the men in the masks.

Yes, I said men in masks.  Although to be more accurate, I should say people in masks.  They are everywhere, they are legion, they do not forgive, and they do not forget.  At least that is the creed they repeat at the end of their missives.  You may not be aware of the groups name, but if you have spent any time at all watching mainstream media coverage of the protests in Ferguson, Istanbul, Egypt, or Hong Kong, you have seen their masks.  The hacktivist group “Anonymous” has adopted the Guy Fawkes mask as perhaps their most evident outward expression of organization.  Anonymous is known for a broad resume of various activities, often related to organizing protests or attacks against various websites and organizations across the globe. 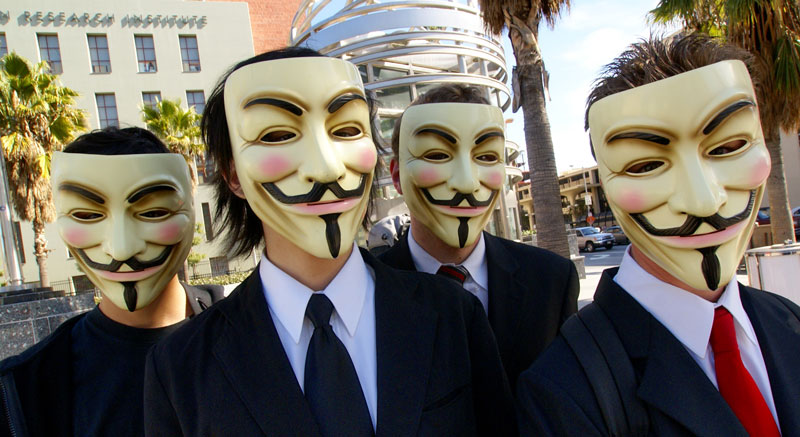 Vincent Diamante – originally posted to Flickr as Anonymous at Scientology in Los Angeles
This file is licensed under the Creative Commons Attribution-Share Alike 2.0 Generic license.

What does Anonymous have to do with our story of feeding the homeless?  That is a great question.

At some point on Sunday, Anonymous declared that the Mayor of Fort Lauderdale had 24 hours to lift the ban before they would launch “Operation Lift the Bans” (not the most creative name, but I suppose it was clear in its intent).   Various news outlets have reported that several web properties related to the government of Fort Lauderdale did indeed go dark for several hours on Monday.  The outage even affected the personal website of the mayor of Fort Lauderdale.  While the judge did not credit the actions of Anonymous in bringing about the moratorium, the timing does seem to suggest that it may have been a factor.

It is a brave new world.

For those of you unfamiliar with the nature of web based hacktivism, one of the more common tools used by groups such as Anonymous is known as a DDOS (Distributed Denial Of Service) attack.  The way a DDOS attack works is by directing abnormal amounts of traffic to a website or server in hopes of causing an overload, and as a result restricting access to the resources available on that site.  If someone were to successfully launch a DDOS attack against Facebook, the practical results would be very long load times, and for some people an inability to access their accounts during the duration of the attack.

In many cases such an attack is annoying, but does not cause any real damage.   However, if we apply the same DDOS attack to a medical records system, or the control network for city traffic lights, suddenly the attack can go from annoying, to potentially deadly.  To my knowledge, no such attack against a critical piece of infrastructure has ever been attempted, and I am not accusing Anonymous or any other hacktivist group of plotting such an attack.    The possibility of such an attack is real however, and should be considered and guarded against.

Which leaves us in an interesting place as we search for peace.

On one hand we seem to have a public interest that wants to sweep the homeless and impoverished under a rug, which wants to keep them out of sight and out of mind.  On the other hand, we have a group with no clearly defined overarching goal that has used questionable methods to influence the enforcement of public policy.  Perhaps just as importantly, we have a large group of people who may have shared the first chapter of this story on their Facebook page, but seemed incapable of making any real change in the enforcement of an odious policy.

If we are people truly seeking peace, we must weigh the positives and the negatives of allowing a group like Anonymous to influence public policy.  We must also ask ourselves why the actions taken by various groups protesting these same rules do not seem as effective as the actions taken by Anonymous.  I do not mean to say that the groups protesting in more conventional ways were ineffective, but rather that in this circumstance, Anonymous has secured a public relations victory.  This is a victory that may encourage others who feel neglected and downtrodden to turn to Anonymous for action instead of the political processes we have traditionally used to affect change in the world.

Are we ready as a culture to redefine the methods of our political struggles?

Are we ready for this brave new world?