Readers…I do not often write explicitly political pieces on this site.  I actually created a whole different website where I and others could share our political thoughts without polluting the tranquility I like to be found here at joshuastairhime.com.  So I ask your forbearance for this piece, and for one more which will follow in the near future.  I believe the discussion contained below is important for our countries future peace, it is because of this that I have included it today.

If you follow domestic politics at all, you will have noticed that congress has been playing a game the media calls “kicking the can”.  They played another round last night when the Senate narrowly passed a budget bill.  The media has described the process as kicking the can because the bill they have passed requires another vote next year to avoid another potential government shutdown.  We have been in a cycle of kicking the “government shutdown can” just far enough down the road to keep the government open (except that one time of course), and we repeat this massive political battle every few months.

Now let me be clear that I do not want to propose a solution to this particular manufactured crisis, because political policy is not the focus of this 25 day project.   I do, however, want to speak to the divided nature of our national government.

Do you remember the way high school seemed to work?  A small group of classmates were in positions of power, and they were able to greatly influence the course of events for our class.  From their ranks rose homecoming kings and queens, and the student council members were drawn from their membership as well.  Being a member of this group did not require a particular skill set or a certain level of personal character, but rather the right last name or access to vast “resources”.  I was not a part of this elite group of decision makers (nor did I desire a place among them) and was content to ignore every decision foisted on me to the best of my ability.   I do not propose that every high school works precisely this way, but I have seen it played out as a stereotype in so many different television shows or films, that I suspect there is a large amount of truth to be found in the stereotype.  Art mimics life, after all.

My class actually ended up with pretty decent “elected” officials, but if you were not one of the elite, you could do very little to influence the course of the class.  Had our group of elites been tyrannically or despotic, we would have had little to no recourse.  The removal of one malfeasant would have been difficult, the removal of all impossible.  They had enough organization to protect the whole, if not every individual.

I only wanted to affect the outcome of one class event in my entire high school career.  I had the good fortune to have been “adopted” by one of the elites of our class, and was able to persuade him to pursue the idea I had, but it meant that I must sacrifice my recognition for the idea so that it could be presented as his own.  This was never openly discussed, but we both knew what had to happen in order for the idea to succeed.   We were successful, the idea was a hit, and the credit fell to my elite friend.  He was happy to have been seen as the source of a good idea, I was happy that the idea had come to fruition.  We were both happy with the outcome, there was no need to renegotiate or regret the terms of our deal.  (I still do not regret the terms, I only bring this story up as a tool for illustration.)

This same system of power is at work in our national government.  We are not as aware of the system in play as we were in high school because of one subtle modification the elites have made to disguise it.  We like to think that our congressmen are elected because of intrinsic value in their character, but if we honestly consider those in power, we will see many who are unsuited to effective leadership occupying leadership positions.  These unsuitable elites are selected through the unacknowledged power of R&D.  The unsuitables often rise to prominent positions within the government, chairing various committees and taking the national spotlight in times of crisis through charisma and a penchant for absurd hyperbole.  The power of R&D keeps them there.  Just as our classmates were advanced in status by last names and resources, so our leadership is often put in place by one small letter appended to their titles.  The mighty (R) and illustrious (D). 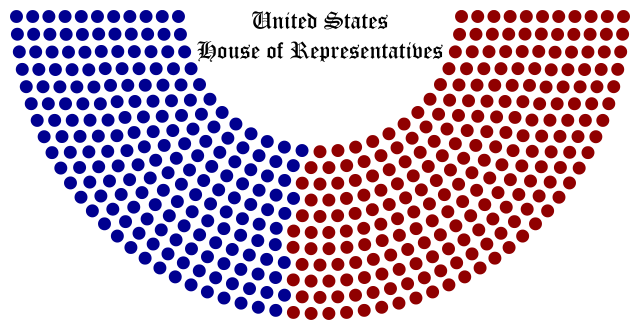 (R) is represented by red, (D) by blue. Notice the lack of purple, yellow, green, fuchsia, mango, avocado, or any other color.

If we are ready to pursue a more effective and peaceful government, we need to recognize our predisposition to electing those we see as our allies, instead of electing those who are best for the job.  Unlike the cliques of high school, I can choose to be a part of one of these two cliques, and by choosing one I feel a sense of belonging or ownership when “my side” has won a critical debate or decision.  By providing two ruling parties, and allowing us to feel ownership in them, the elites have disguised their system of dominance, and distracted us from its shortcomings.

Is this really a problem you ask?  Don’t the two sides keep us balanced, and prevent us from toppling over the edge into some unforeseen disaster?  The narrative is such that if we did not have 2 diametrically opposed views, a dastardly third view could enter the fray and send us hurtling in a new and unpleasant direction.  If R&D weren’t so strong, the C (communism) or S (socialism) could win!  By providing two directly opposed views, each side gets to blame the other for the lack of progress.  The third party is vilified by both sides, so it is assured failure.  It is as if our minds are saying “If even the enemy (the party you do not identify with) thinks these people are bad, they must be our generations Hitler seeking to rise to power!” 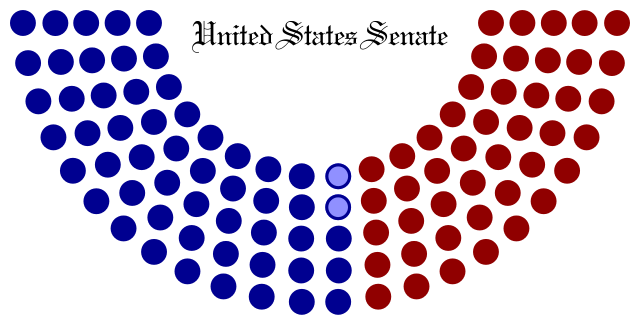 The Senate has the rare distinction of having 2 independents. They are the slightly less blue circles in the middle. Only 2 independent voices representing an entire country…

Congressional approval (of both sides) fell to roughly 10% this summer.  10% of our country thought that congress was doing a good job.  If this is not indicative of failure, we need to change the grading scale.  If my employer was only 10% satisfied with my work, I would not have an employer for much longer.

The R&D protect and elect the inefficient and the ineffective.  The status quo is maintained.  The tragedy of this is the loss of new solutions to problems we have not yet solved.

I could have never proposed my idea to my class as my own.  It would not have been accepted because I was not of the elite.  Did my social/political status change the quality of the idea?  In our current government, I would do exactly as I did in high school.  In order to be elected I would have to choose to join R or D, and then hope that my idea could be accepted as an idea of the party.  This is my only chance at making change.

Unfortunately to be in the club for R & D, you are expected to vote in certain ways.  If you stray from the party line, you risk being branded as an independent in disguise, and risk being separated from the incredible electoral power of your party.  This separation from the influence and resources of R or D will likely be the death knell of your career.  Those in congress who in ideology are truly independents must disguise themselves to have any hope of fulfilling the will of the people.

We have two years before the next major elections.  I submit that we the people are going to have to start electing “third party” members.  If we do not, those with fresh and new ideas will never be able to share them for the betterment of our country.  As more independent or third party members are elected, those good officials who have been hiding beneath R or D may feel that they can emerge from hiding and make the compromises their party will not allow.  To ensure our peace as a country we must begin to dismantle the status quo, before our elected officials become despotic and tyrannical!

Our future peace as a country depends on it.

Every penny we raise makes a difference and brings clean water to someone who did not have it before. Whether our goal is reached or not!