Church just wrapped up on our fourth day in Haiti, and if you have never been to a Haitian church service, I can sum it up in one word.  Loud.  The music is loud, the people are loud, and the pastor is loud.   All around you, you will see Haitians wearing their Sunday best.  A few of the men are in full suits, others nice shirts and slacks.  Most of the women are in nice dresses, and a few are dressed up as if they were going to be attending the Oscars right after church.

The effect is somewhat mesmerizing, seeing someone in a full suit, standing at the front of a church that is only a roof supported by narrow concrete pillars.  Watching ladies in dresses sitting on handmade benches while they listen to the message.  Seeing the neighborhood children, some of whom may not eat today, wearing their best while they sit listlessly during the long sermon.

I see this dichotomy everywhere.  On one hand I am sitting right on the ocean with beautifully blue waves gently lapping the palm lined shore, while a quick glance across the surface of the water reveals enough trash to fill at least one industrial sized trash bag.  Yesterday we went to the beach with most of the kids in the orphanage, 48 people jammed into a truck too small to move even a modest North American household in one trip.  The kids ran into the waves with the fervor one would expect from orphans on a beach trip, and as the little Haitian boys jumped off of my back into the cool salt water, the moment was nearly perfect.  Until a used condom floated by. 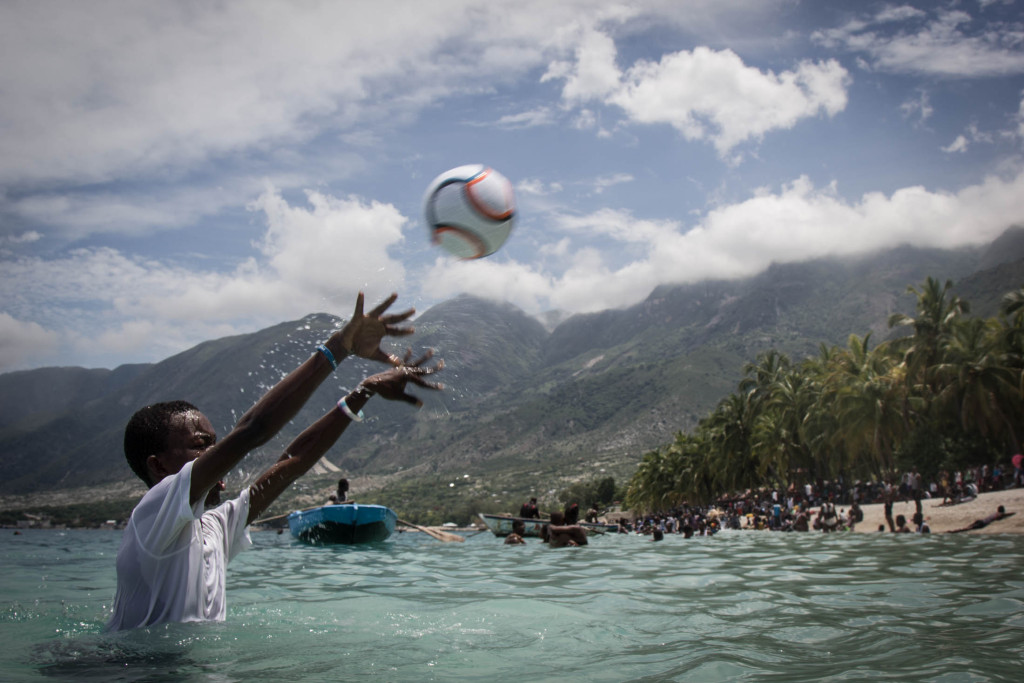 Just another day in Paradise…

The emotional mountains and valleys are even more impressive than the physical ones you find in this country.  On Friday, we had returned from the nearby school where we were doing basic health exams, to our home away from home for the week, Tytoo Gardens.  The general mood was one of a lazy afternoon, the kind where you kick your feet up and watch the grass grow as you become one with your lawn chair.   I slowly brought out interview equipment, hoping to make the most of what we all expected to be a lazy afternoon.

After getting set up, I wandered downstairs in search of my first victim (interview subject) for the day.  I like to circle my prey (interview subjects) before I attack (ask them to talk to me), so I drifted around like a leaf on the wind, trying to get a good feel for who may be the most willing to talk to me.  When the gate rolled open and the truck rolled in, I carelessly filmed it, wondering what I might use the unplanned footage for.  I lost interest in the truck before I saw the passengers get out, and went back to circling my prey. 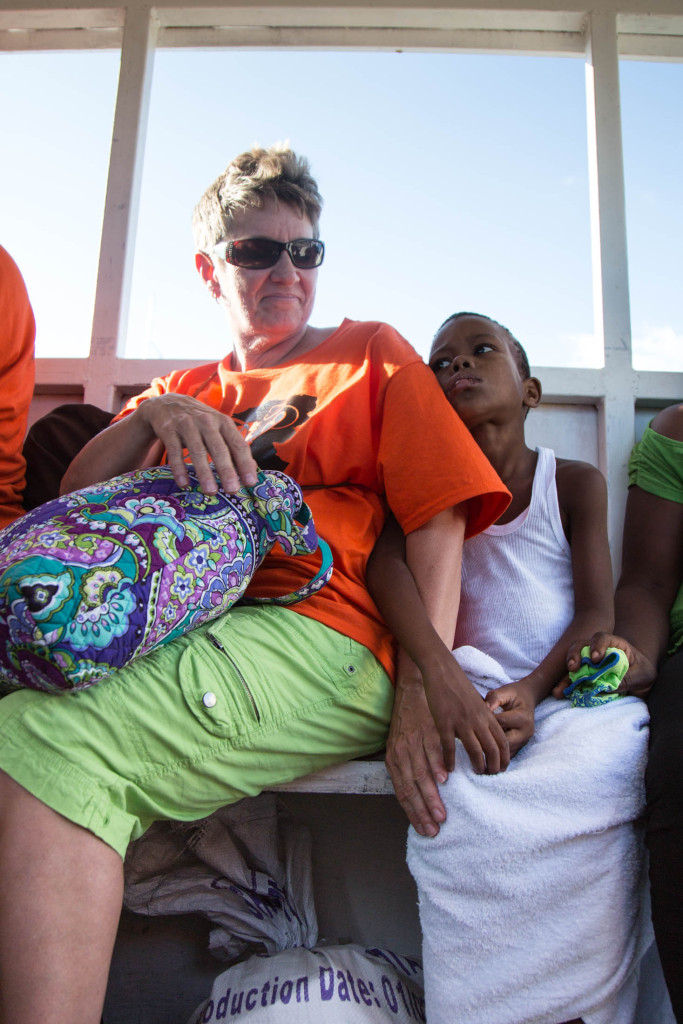 Denzly has already made a new friend on the way to Simonette from the hospital in Port-Au-Prince Wednesday evening.

I settled in next to one of my potential victims and casually asked where the rest of the group was, making some remark to the effect of “is someone having a baby?”.  The answer was that one of the little boys we had met earlier in the week was not doing well, and the medical people had brought the boy to the clinic to see if they could help him out.  I slowly walked towards the clinic expecting some minor bump or scrape being put right and was broadsided by a child nearing full cardiac arrest.  In one moment my afternoon went from one of peace and tranquility, to one of uncertainty and frenzy.

It only took a few minutes of watching in the clinic to determine that we weren’t going to be able to help this kid on site, and as the medical staff rushed around trying to stabilize the boy, I ran out of the room to throw back together my gear bag which was scattered across the porch I use for our interviews.   I gave some of the other team members a quick update as I hurried to fill my water bottle.  As the water poured out of the cooler, I did my best to keep the tears from falling from my eyes and the fear out of my voice.  I had stayed in the clinic long enough to see more uncertainty in Kori’s eyes than I had ever seen there before on any of our other trips together.  I wasn’t really sure what to expect next. 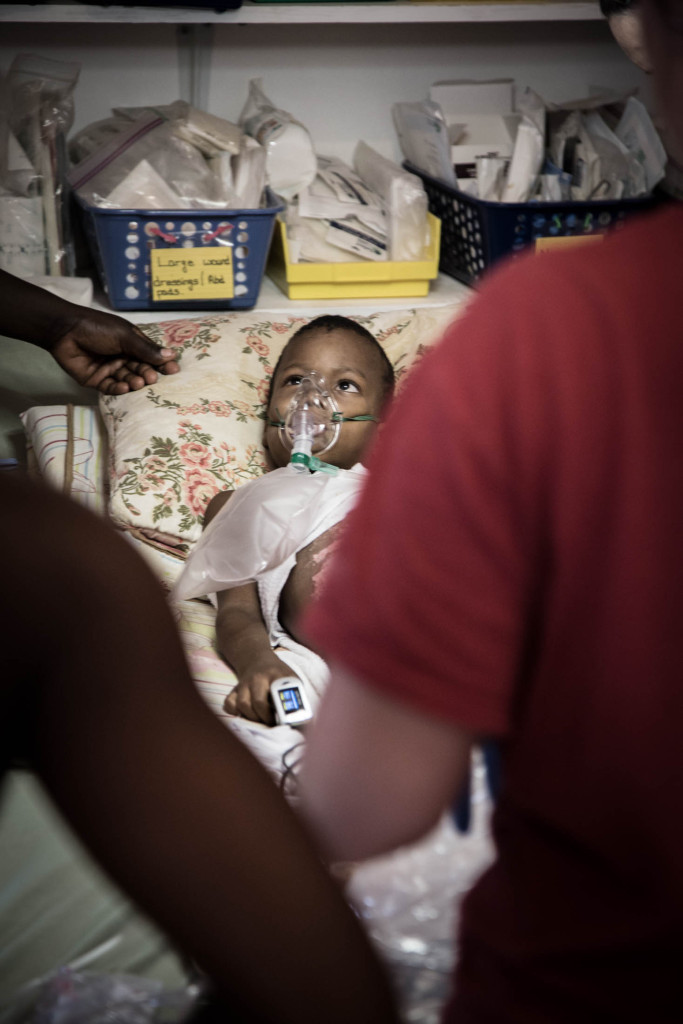 Fortunately the gear went back together quickly, and as I rushed back into the clinic I started trying to find a way to help without being in the way.  I ran back out again to ask Beth, Alitza, and Jenna, to put together water bottles and other necessary stuff for Kori, Jen, and Troy.  I ran into the clinic again and snapped photos as I waited for what seemed like the inevitable decision to get this kid to a hospital.  Without any portable oxygen, Kori wasn’t too thrilled with the possible outcomes for the kid. It seemed that the chances for the kid surviving transportation to the hospital were not great.  Cell phones buzzed across the room as the Tytoo staff sought the fastest path and the closest vehicle to get to the hospital in Port-Au-Prince.

The nearest ambulance was 30 minutes away, and they were still looking for the driver as Webert (pronounced Way Bear), the director of the school we had worked at in the morning pulled into the compound.  Kori, Jen, and Troy carried the kid out to the back of the truck as the staff tried to decide who needed to go with us to the hospital.  I quietly took the last spot in the back of the truck and asked if I could go.  After a few moments of indecision, they seemed to forget about me, so I stayed in the car as we sped off towards the hospital with Webert at the wheel.  Jen steadily pumped air into the kids lungs as Kori and Troy did their best to monitor the kids vital statistics.

The roads in the little village of Simonette where we serve are not great, but Webert managed the truck well, slowing down only when absolutely necessary.  Once we were out of Simonette the road turned from rough stone into fresh pavement, a brand new road that lead to Port-Au-Prince from a port that is being built in nearby Minotree.  I grew up in the country, and am no stranger to riding in the back of a truck, but I can say honestly that I have never gone that fast in the open as we did on that trip.  Quickly realizing my medical uselessness, I started watching the road so I could shout out direction and speed changes for the team as they worked on the boy.  Driving in Haiti is nothing like driving in the United States, and for a North American driver, what Webert did to get us their safely was akin to a miracle. 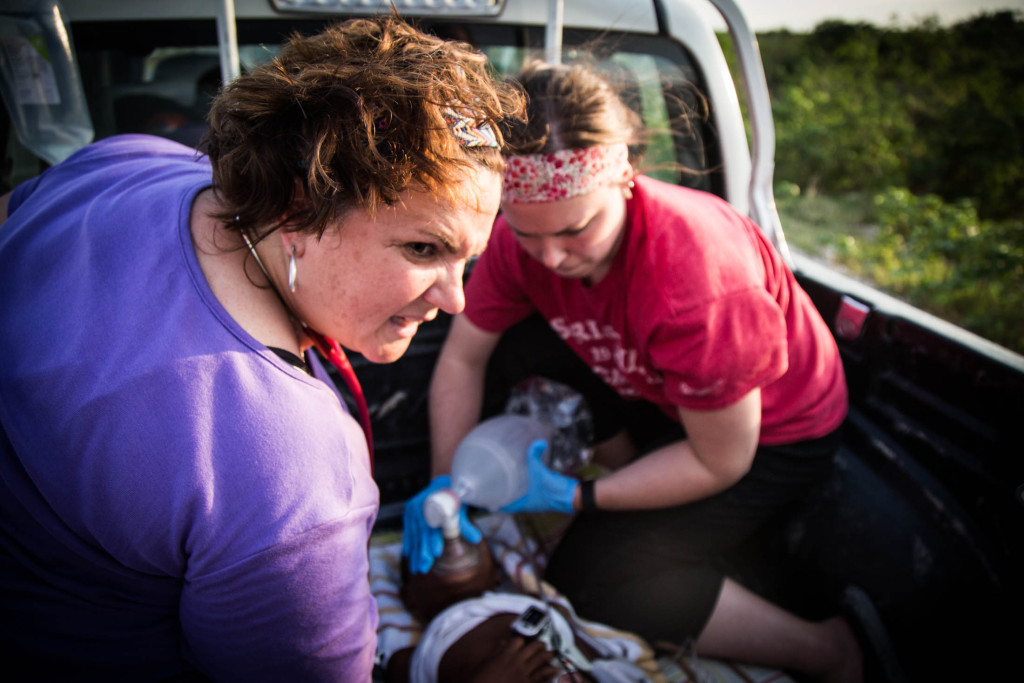 Holding on to life…

The roadside flashed by as we sped towards the hospital, each mile measured in breaths given by a bag being pumped by hand.  When the truck made the final turn onto the street with the hospital on it, the truck horn, previously strangely silent, became a constant drone as we pushed through the still crowded streets to the hospital door.  The doors opened ahead of us and we dropped the tailgate as Hillary, a Canadian Paramedic working with Tytoo came out of the hospital to bring Denzly into the emergency room.  I grabbed a corner of the mat, but was stopped outside the door, relieved of my duty for the moment.  For me, the time for adrenaline had passed, and I waited outside with Webert, Kayla, and Troy. 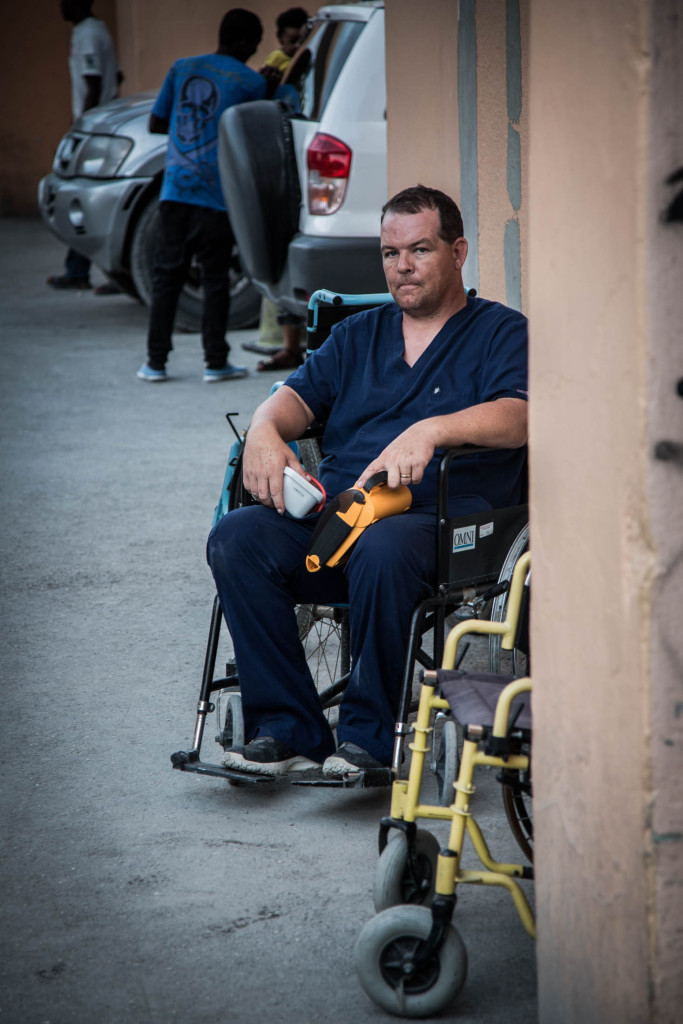 For some reason it didn’t surprise me that our little medical team kept working on Denzly.  It wasn’t until several hours later when they came out exhausted that I stopped to think about how odd it was that they were not able to just drop Denzly off and head back to Tytoo.  When we arrived, the emergency room staff were dealing with a pair of gunshot wounds, and Denzly was not getting the immediate attention his situation warranted.  Our team kept pumping air into his lungs while the other patients were taken care of.  They worked to stabilize Denzly as he seized for what they described as hours.  When we finally left nearly 2 hours after we had arrived, the outlook was still grim for the boy, but he was admitted into the pediatric section and our team could do nothing else to help. 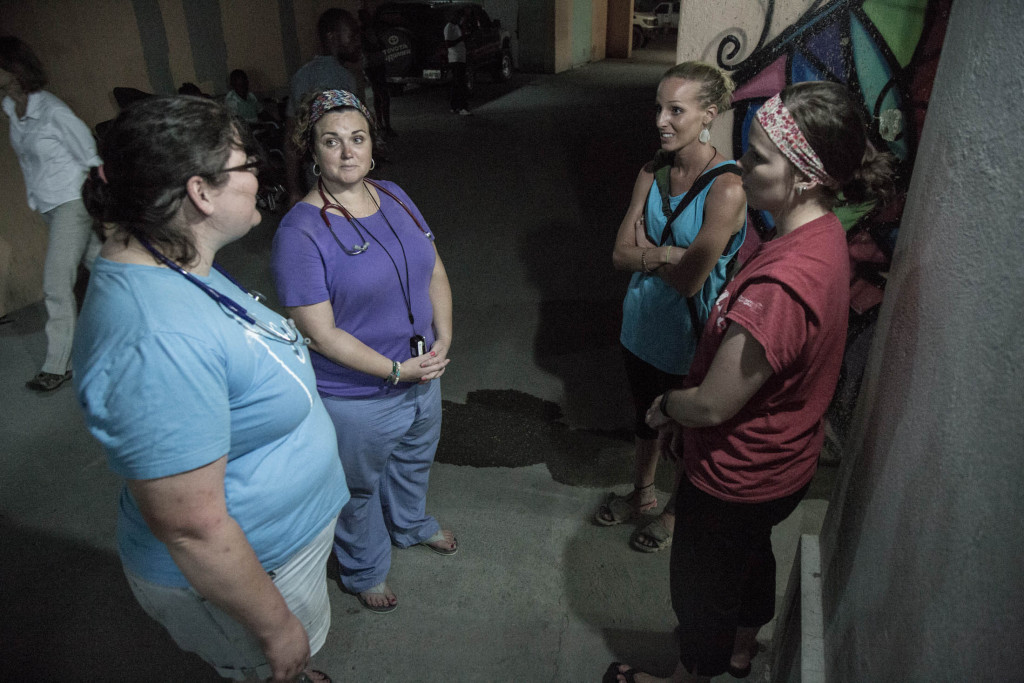 Hillary, Kori, Allie, and Jen are finally getting ready to head home to Tytoo for the night.

As we drove back to Tytoo through the darkened streets of Port-Au-Prince, the mood of Haiti seemed to change again, from one of frenzy to one of relative calm.  The team members discussed the events of the day, reliving the moments that seemed like weeks ago now, just a few short hours later.  Allie sat quietly on the side of truck, I suspect reflecting on this moment, and all of the moments like it that she has experienced in this country so far.  While the medical  conversation drifted from the events of the night to other experiences and stories, Allie sat looking into the darkened distance over the hood of the truck,  as the headlights reached furtively into the night in an attempt to illuminate the coming unknown…Allie hoping to discern what Haiti might bring her next.

It turns out this wasn’t the whole story…you can find the continuation in “To Be Used“.