I stumble around Youtube from time to time, and occasionally something really captures my attention.  I was wandering about Youtube yesterday in fact, and found a compilation video of a theoretical physicist named Michio Kaku.  To summarize and simplify the first few minutes of the video, Michio shares that everything in the universe is like Schrodinger’s famous cat problem.  For those of you who are unfamiliar, Schrodinger posits that if a cat is placed in a box and unobservable, it must be both dead and alive simultaneously.  It is only when the box is opened and the cat is observed that it becomes either dead or alive.

Schrodinger’s cat is known for seeming to be illogical but theoretical physics has found that it is a viable interpretation of how our world is working at the atomic level.  MIchio takes this concept a step further and talks about how nothing in the universe can even exist if it hasn’t been observed.  He states that the observation of something is essential to it’s creation.

Creation.  Perhaps the biggest argument of science and faith.  How were we created?

Genesis 1:4  And God saw the light, that it was good; and God divided the light from the darkness.

God saw the light that he created.  God observed the difference between light and darkness and then continued creating, seeing that each new thing was good.  God “sees” 7 different times in the first chapter of Genesis.  In the beginning, God created, God saw.  He observed that which he had made, and called it good.

Psalm 139:16 Your eyes saw my unformed body;
all the days ordained for me were written in your book
before one of them came to be.

God saw me when I was unformed, when he brought me forth into this world.  He saw me then, and he sees me now.  I am seen, and I am known.

Perhaps one day we will see that science itself points to our creator, and perhaps in that day we will no longer only know in part, but instead see the entirety of the truth that God has created for us.

Sometimes I can be a little bit, shall we say, fatalistic?  I somewhat relish the idea that some things are inevitable.  It takes a lot of pressure out of the situation to know that the final result is unchanging.  So when people talk about the inevitability of death, sickness, or taxes, for me there is a small little bit of peace in the finality of it all.  It is as if my internal monologue is reassuring itself with something to the effect of “We can’t change this, so let’s just accept this and move on, okay?”   That finality is not something I’ve really been afraid to embrace. 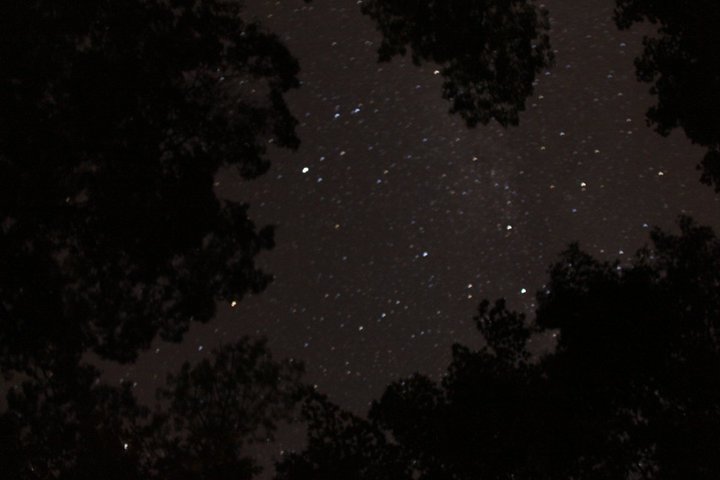 Tonight I walked outside with a box of stuff that I needed to dispose of, and since we live in the country I put the box in our burning barrel and lit it on fire.  In those brief moments before the light from the fire began to overwhelm my night vision, I leaned back and looked up at the stars.  On nights like tonight in the country, you can see stars everywhere.  They run up and down, back and forth across the inky expanse of the night sky.   The stars letting in light like fabric with far too many pinpricks in it to still be worn as clothing.  Some areas were brilliantly concentrated sections of light, and others sporadic and distanced.

The flickering light of the fire began to distract me, and I looked over to see flaming drips of plastic falling further down into the barrel, almost like the shooting stars I sometimes see on nights like tonight.  First a small burst of light that goes out almost before you can recognize that it was really there, and then a lingering stare, as if by looking harder you can bring the starry streak back again.  I watched as these shooting stars of flame fell, igniting the trash below it.  I watched as the fire crawled up the side of the box, unmaking the things in its path, taking away their form and function.

I have witnessed the effects of fire many times before tonight, but this time the simple little exothermic reaction I had created sent a shiver through my soul.  You see, every fire has a few common characteristics: fuel, an oxidizer, heat.  One other thing that fire always seems to carry with it is entropy.  Very loosely stated, entropy is the measurement of disorder in a system.

If you’ve made it through a high school level science class, you’ve probably heard at some point or another that energy can not be created or destroyed, that energy can only be changed in form. Of course if that was the whole story, then fire would just be a restructuring of energy.  Stored energy would become released energy in the form of heat, that would interact with the larger system around it and the effects would ripple down the line forever.

Except that isn’t the whole story.

You know what is even more terrifying?

Increased entropy is the natural result of unguided actions.  All we have to do for entropy to increase, is to let the world do its own thing.  Entropy naturally increases as the world moves from a state of order, to disorder.  Every second, more and more energy is lost to our system (i.e. the universe) and removed from the equation around us.  Every second.  My little fire wasn’t just unmaking the stuff in the fire, in effect I was participating in unmaking a part of the universe.  Forever.

So I got pretty freaked out when I started thinking about it.  I’ve actively unmade part of the universe, and I can’t remake it.  I can’t fix it.  I’ve pushed the universe one step closer to it’s inevitable end!   That’s what happens you see…eventually the universe runs out of energy.  Beautiful stars die after spending all their fuel, leaving behind frozen planets and broken orbits.  One by one the stars becomes more distant, more separated, more isolated, until nothing visible remains, just darkness, the absence of light.

A total buzzkill on a beautiful starry night, right?

There are very few Bible verses that I personally find really comforting, I just don’t really get into “life verses” or motivational applications of popular verses.  I believe in the meaning of the whole bible, but I just don’t find comfort in most verses without the context of the rest of the bible surrounding it.  There is of course an exception.  If I had to summarize the whole Bible in one small phrase, I would choose this phrase from Revelation 21:5.  “Behold, I am making all things new.”  If you gave me one more phrase I would continue with Revelation 21:6 “I am the Alpha and Omega, the beginning and the End.  To the thirsty I will give from the spring of the water of life without payment.”.

In a universe that is quite literally tearing itself apart, in one phrase I can know that all things will be made new.  In that phrase, the Alpha (the beginning) and the Omega (the end) have told me all that I need to know.  In that one sentence, you can find God, Jesus, the Holy Spirit, the ultimate being that is outside of time, promising to make all things new.  Granted this small sentence is somewhat sparse on the details of how and why and when he will make all things new, but for me, this one promise is enough.  God is going to make everything new.  I don’t know how, but I know that he will.  Jesus didn’t just defeat sin and death on the cross, he also defeated the inevitable, he defeated entropy.

In a universe that is inevitably hurtling towards eternal darkness, only the beginning and the end can say “Let there be light”.

For a great science fiction short story I stumbled across the other day by Isaac Asimov (that admittedly inspired this post) check out “The Last Question”.