I got a somewhat sobering and unexpected text tonight. It was from my aunt, who wanted to know if and when I might be getting back to my parents house tonight.

My mother has brain cancer. This is the third time that she has started treatments and she had just had a port put in for the chemo drugs today. My aunt wanted me to know that mom was doing okay, and that mom didn’t want to be a burden and was pretty much sending her away.

I eventually made it home from church (band practice) and walked in to moms room where the light was still on to check on her. She normally hears the door open and even if she was already asleep says hello and asks how I am. Tonight she didn’t do that, so I made sure she seemed okay and quietly stepped back out. Before I left however, I noticed something beside her on the bed. It was her Bible.

If anyone has a reason to be angry at God and lose faith in him, surely my mother has reason also. This is the third time cancer has attacked her. She first found out she had cancer the same day we were supposed to have a home inspection as part of the adoption process of a little girl. Mother was adopted and wanted to adopt as well. She wanted a daughter to take care of and rescue. It all went away that day in the hospital.

She had a surgery and radiation to treat the cancer, forcing it in to remission. One of the permanent side effects of the treatment was a serious impairment to the way her brain functioned. She could no longer speak easily, had trouble remembering things, and was restricted from driving for several years. The cancer had gone into remission but she lost her daughter, her freedom and her ability to easily communicate with the outside world.

Surely this was enough to justify anger with God.

After several years, mom tried to return to work at the hospital. She had been an RN before her tumor, with all of the intelligence that implies, but her new reality made it so that she had to walk away from her former career.

10 years later, the cancer returned, resulting in a second round of treatment. A second loss of driving privileges, a deeper imprisonment. Her ability to communicate suffered again as well. The cancer leaving her feeling increasingly isolated and alone as it affected more of her brain.

Her second son left for Iraq just a few months into treatment. No one knew if he would return, and the predictions made by the medical professionals seemed to say that even if he did return alive, mom probably wouldn’t be.

That same son was also recently diagnosed with his own cancer, now has his own battle to fight.

Surely she has reason to be angry at God.

Yet, her Bible sits beside her as she sleeps tonight.

Where her career was taken away, she volunteers at a local hospice. She raises money for Relay for Life, she serves at a local food ministry, and on the board of the youth center where I work. Always ready to give a hand where she can…

Where her communication was taken, she writes notes of encouragement. Notes of care and love for her family and friends. While she struggled to communicate in our own culture, she left her comfortable home and served for 10 days in the sweltering heat of Nicaragua. In a land of poverty and hopelessness, she brought hope to those she touched.

She has not given up on God, but rather clings to him as her only hope. As Job refused to curse God and die, so does she!

And as tonight she sleeps with a hole in her chest and only uncertainty ahead, she clings to the one who is waiting patiently to restore to her new life.

She read his love letter tonight.

I hope that one day my faith will be as hers. Complete.

( My family, immediate, extended, and church family, have all been an incredible part of her life, and have served her sacrificially when she needed it most. Thank you all. Your sacrifices are not forgotten.) 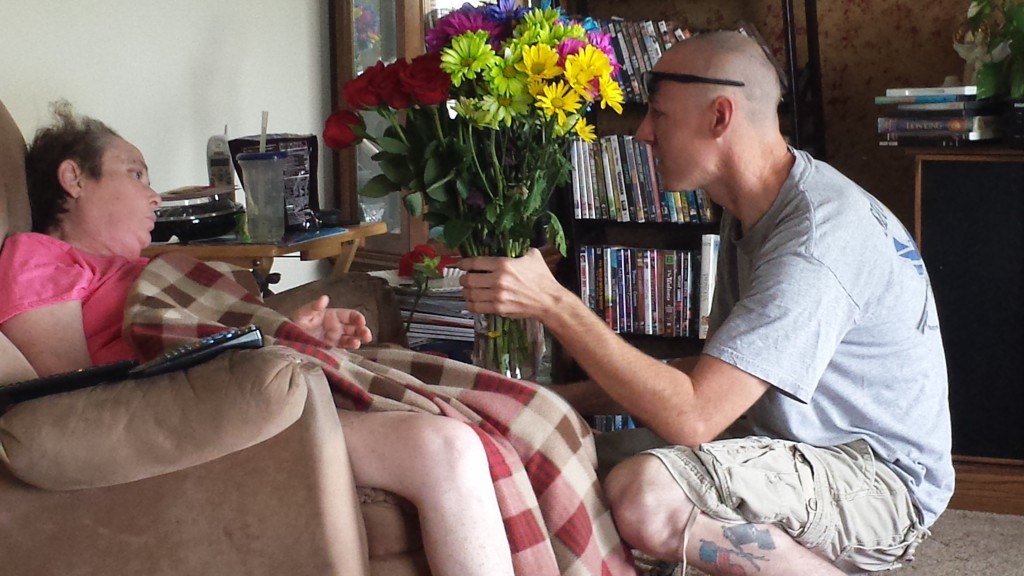 Mom getting flowers from Aaron via Jake this fall.

Edit 10-19-14:  It has been a year since this past note was written.  A year filled with ups and downs.  The false hope of a “recovery” in February followed by the onset of stroke like symptoms in July.  My mother hasn’t been able to say much since July, and on her birthday (today) we don’t expect to be able to hear her voice at all.  We aren’t always sure what she is thinking or feeling, and it is easy to hope for the best, but through it all, she has accepted what is out of her control.  On September 29th, the decision was made to begin hospice care.  While she hasn’t finished her race yet, we are all aware that she could be crossing the line any day now.