I want to be influential.

It sounds ugly coming out of my mouth, which is why it is difficult for me to accept that at the foundation of many of the things I do, is a desire to elevate myself above those around me.  I have a desire to be perceived as better than those around me, even if in fact, I am not.

The desire is ugly, and there is no way to just gloss over it.   At the same time however, even though I knew this ugliness resided in my heart, I thought I was keeping it under control.  I thought that I was not letting it affect my actions.  I thought that I would rise above that desire and be an even better person because of my ability to rise above it.  You may start to see where this thought process was leading me.

So when I found myself in Williamsport Indiana for a church picnic and concert on Monday, I swaggered in with all of my self confidence and bravado barely in check.  I was there to “change the world” by filming another part of this documentary I am working on.  You know, one of those things that is going to make me famous!  I was there specifically to film theSurrendering, who are an amazing husband and wife duo that sold everything to move into a 17″ camper and tour the country sharing their music anywhere they are invited with no financial expectations.  If you haven’t checked them out, you should!  Williamsport is where Joe and Rebecca set off from last September, and I wanted to capture a bit of what it was like for them to be back home after being gone for so long. 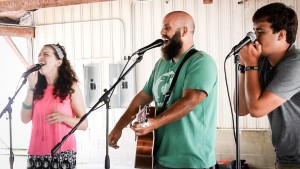 If I am entirely honest with myself (and you) another reason I was filming Joe and Rebecca at this particular event is that they had somehow managed to get the lead singer of one of my all-time favorite bands to play an acoustic set after them.   Matt Baird is the lead singer of Spoken, and if you knew me in high school, you might remember the Spoken hoodie I wore almost everyday.  So when I found out he would be there too, I just knew that this event was one I didn’t want to miss.

I pulled in at about 2:30 to a crowd that looked like about 100 people.  Joe and Rebecca went on at 3(ish) and Matt was scheduled to play at about 4.  I ran around dutifully collecting footage that I hope will be useful for the documentary, and kept a watchful eye on the stage to make sure I didn’t miss Matt.  Due to a slight confusion regarding time zones, Matt was a wee bit late, and by the time he arrived, the crowd had dwindled a little more. 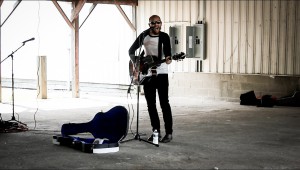 Matt gets a little passionate too!

I don’t really know what I expected from Matt, but I do know that if I had pulled in an hour late for a show, I would be really frustrated with myself, and everyone, and everything around me.  My attitude would have been particularly sour once I saw the size of the crowd.  I think my inner dialogue if I were in Matt’s place would be something to the effect of “don’t these people know who I am?  I’m the lead singer of a freakin’ awesome band!”

So when towards the end of his set Matt took a few minutes to share a part of his story, I was a little surprised by the way he chose to finish.  He said to this crowd of about 70 people of all shapes and sizes, by no means the largest or “most important” crowd he has ever been in front of  “It is an honor to be here, thank you for letting me be here.”  He didn’t say it ironically, or sarcastically, but sincerely and intentionally.   He took this crowd of people he would probably never meet again, and treated them as family, as beloved friends.  I have never felt so included at a concert as I did in that moment.

Which leaves me to confront my ugliness anew.

I never even thought about thanking any of the people around me for letting me crash their party.  I just assumed that what I was doing was inherently important and that those around me would see that.  Regardless of intent, I missed an opportunity to connect with my brothers and sisters in Christ that Matt took advantage of.

I hope that I will learn from Matt’s humility and that it will change the way I treat those around me.  That I will quickly forget my self assigned importance, and learn to truly treat others like I want to be treated.

Enough about me…go check out these awesome (and humble) people!

Comments and discussion welcomed!  Due to the massive amount of spam comments I receive (at least 35 a day) your comment won’t show up right away, but I promise I will approve it as soon as I can.

There are plenty of reasons for me to want to go back, I chose a few and put them together below for your enjoyment.   END_OF_DOCUMENT_TOKEN_TO_BE_REPLACED

I’ve watched two movies this weekend.  One that many of us have never heard of, and one that has been all over my Facebook feed.  One film had excellent production, a large budget, and plenty of celebrity actors and actresses.  The other film, was made on a small budget, had unintentionally shaky footage, and no famous people.  One of the films is obviously a “christian” movie, and the other is not.  One has been tweeted, texted, shared and has been playing in theaters around the country for weeks and the other…while making a splash at certain film festivals, never saw a wide theatrical release.  One of the movies literally had me on the edge of my seat, ready to stand up and walk out of the room in disgust.  The other film left me, and those with me, speechless for several minutes at the end, trying to process what we had just seen.

Both movies have changed my life forever. END_OF_DOCUMENT_TOKEN_TO_BE_REPLACED

On a bit of a whim, I asked the darling Karalee if she would walk us through the proper way to mix concrete in Nicaragua. As usual, she delivered, with her own unique style.  There are lots of little videos that need assembled from my last trip to Nicaragua, and I’m hoping to find some time to put them together soon.  Maybe even before this years trip!

She will be returning this year and could use your $$ support…if you’re into that sorta thing. If you’re interested in helping and don’t already know her…contact me and I’ll help you make the connection.

I do not do well when put on the spot.  If I don’t have time to formulate my thoughts on a particular subject, I am apt to enter “make it up” mode.  I feel like I am decent at getting away with coherent thoughts that sound like I am saying something I believe.  So when Pastor Bill asked me to share about my experiences going to Nicaragua during our Sunday meeting, I quickly decided that it would be more effective to say something that sounded good, that sounded believable and important, than to focus on the little voice whispering about a completely different direction for my unexpected time in the spotlight.

I talked about how “relationships” are the key to the Nicaraguan experience for me.  If you know me at all, the little talk I gave would probably have surprised you.  I don’t think I said anything that wasn’t true, but for me “relationships” aren’t really the biggest thing that has happened to me because of my trips to Nicaragua.   I tried to mentally discredit the other direction for fear that it would be seen as bragging or sensationalist. END_OF_DOCUMENT_TOKEN_TO_BE_REPLACED